RSS chief calls for handing over Hindu temples to Hindus 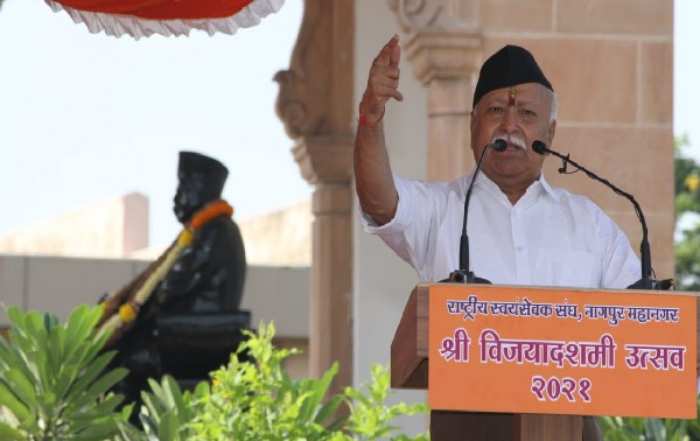 Nagpur (Maharashtra) : Rashtriya Swayamsewak Sangh chief Mohan Bhagwat on Friday suggested that the operating rights of the Hindu temples be handed over to the Hindu community.

The RSS chief also suggested that the wealth of the Hindu temples must only be utilised for the development of the welfare of the community.
“State of the Hindu temples today is one such concern. Temples of South India are fully controlled by the state governments. In the rest of the country some are managed by the government, a few through joint family trusts while some are run by the trusts governed under society’s registration acts. Few temples completely lack any system of governance,” he pointed out.

“Instances of misappropriation of movable and immovable properties of temples have come to light. Specific ceremonial guidelines and guiding texts apply to each temple and the deity residing therein. Instances of interference and meddling with those ceremonial matters have also been reported. Non-discriminatory ease of access and opportunity for seeing, worshipping shrine of Gods, to all devotees irrespective of caste and creed is also not practised everywhere; this should be ensured,” Bhagwat said during his annual Vijaya Dashami address in Nagpur.

“Alongside this thought, it is also necessary to devise a scheme to once again make temples the epicentre of our social-cultural life while ensuring appropriate management and operation of the temples based on the strength of the Hindu society,” he added.

The Vijaya Dashami address of the RSS chief is considered the most important event for the organisation as it is during his address future plans and vision are put forth for all to follow. It is from this stage that RSS stand on many issues of national importance is known.

Dussehra or Vijaya Dashami, according to the Hindu calendar is celebrated on the 10th day after the nine days of Navratri festivities in the month of Ashvina.

Celebrate the auspicious festival of Navratri with these scrumptious yet healthy…