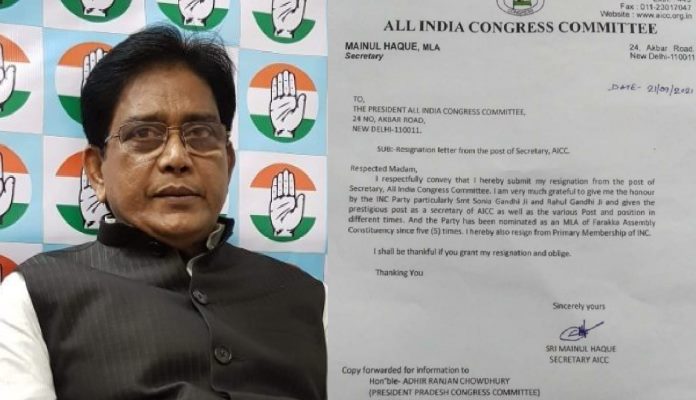 Kolkata – All India Congress Committee (AICC) secretary and former MLA Mainul Haque on Tuesday resigned from the party. According to sources, he will join Trinamool Congress (TMC) on September 23.

Mainul Haque was a five-time MLA from Farakka in West Bengal’s Murshidabad district. He submitted his resignation to AICC president Sonia Gandhi.

Expressing his gratitude to Sonia Gandhi and Rahul Gandhi, he wrote that he is grateful for his appointment as a secretary in AICC. He also thanked them for nominating him as an MLA from Farakka.

Earlier, on September 18, former Union Minister and former BJP MP Babul Supriyo joined TMC. Abhishek Banerjee on Saturday had said it is just the beginning, many more leaders to join the party.

TMC spokesperson Kunal Ghosh on Saturday had said that more leaders will join the party in the coming days as Bharatiya Janata Party (BJP) is “just a gas balloon with no ideology”.

Earlier, the Bharatiya Janata Party leader Supriyo had announced he was leaving politics and will also resign as an MP. He had stated that he would not join any political party and neither have the parties including the Trinamool Congress, CPI(M) or Congress had called him.