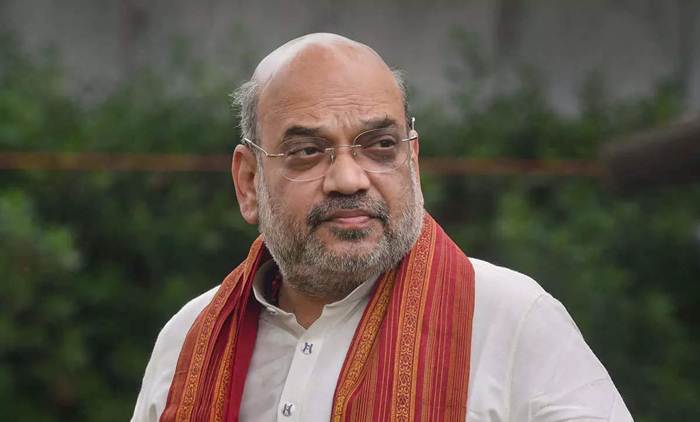 Lucknow (Uttar Pradesh) – Taking a swipe at opposition leaders including Akhilesh Yadav over their past remarks that BJP makes promises about building a Ram temple at Ayodhya but does not specify a time frame, Union Home Minister Amit Shah on Friday said that foundation had been laid of a grand temple and the Samajwadi Party leader did not even make a donation towards the construction work.

Amit Shah, who launched ‘Mera Parivaar-BJP Parivaar’ membership drive here as BJP gears up for the assembly polls early next year, said the BJP was repeatedly taunted by opposition parties over its support to the demand for a grand temple at Ayodhya.

Prime Minister Narendra Modi had laid the foundation stone of a grand Ram temple at Ayodhya in August last year.

“Akhilesh and company used to taunt us in 2014, 2017, 2019 that BJP says that the temple will be constructed there but does not tell the dates. Akhilesh babu, not only date but foundation stone has been laid of the temple, You missed out giving even Rs 5,000,” he said.

Shah said innocent kar sevaks were killed during the Samajwadi Party rule in 1990.

“Akhilesh Babu, I want to remind you that when your party was in power, innocent Ram bhakts were killed through bullets. It is the same state, there is BJP government and Ram Lala is going to have a grand temple,” he said.

The union minister said that Uttar Pradesh has made rapid development strides under BJP rule.

“Before 2017, Uttar Pradesh was the seventh-largest economy of the country, today it has become the second-largesst. Akhilesh babu’s state budget was Rs 10 lakh crore. Yogiji has kept an interim budget of Rs 21.31 lakh crore,” Shah said.

He said that unlike the opposition, the BJP has proved that its governments work for the poorest of the poor.

“People who were sitting at home for the last five years are coming out thinking their government will be formed. I want Akhilesh Yadav to tell the people of Uttar Pradesh that for how many days he was staying abroad. Where was he during the COVID and floods? They only worked for their family,” he said.

The Union Home Minister said that the BJP government in the state had fulfilled 90 per cent of promises made in the 2017 manifesto and the remaining 10 per cent would also be completed by Chief Minister Yogi Adityanath in the next two months.

Uttar Pradesh is slated to go to the polls early next year.