HeadlinesNational
By Digital Desk On Nov 15, 2021 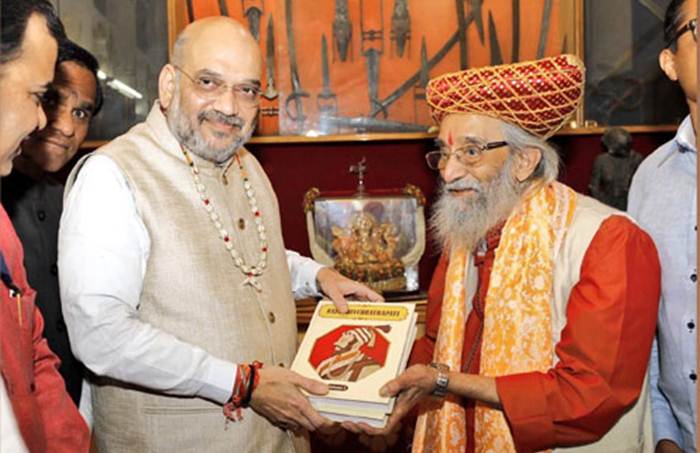 New Delhi  : Union Home Minister Amit Shah on Monday expressed grief over the demise of Padma Vibhushan Shiv Shahir Babasaheb Purandare, saying “his death is the end of an era”.

Taking to Twitter, the Union Home Minister reminded “A few years ago I had the privilege of meeting Babasaheb Purandare ji and had a long discussion. His energy and ideas were truly inspiring. His death is the end of an era.”

“My condolences to his family and countless fans. May God place him at his own feet,” the Home Minister tweeted in Hindi.

Purandare (99), popularly called ‘Shiv Shahir’ (Shivaji’s Bard) for his work on seventeenth-century Maratha warrior king Chhatrapati Shivaji was recently diagnosed with pneumonia for which he was undergoing treatment, according to doctors at the Deenanath Mangeshkar hospital.

Prime Minister Narendra Modi, in a series of tweets, also remembered Purandare as “witty, wise and with rich knowledge of Indian history”, and that he had the honour of interacting with him “very closely” over the years.

“I am pained beyond words. The demise of Shivshahir Babasaheb Purandare leaves a major void in the world of history and culture. It is thanks to him that the coming generations will get further connected to Chhatrapati Shivaji Maharaj. His other works will also be remembered,” one of PM Modi’s tweets said.

In July this year, Purandare entered his centenary year and was greeted by a host of leaders from various fields including politics, cinema and literature.

Raja Shivchhatrapati, Purandare’s hugely popular two-part magnum opus on Shivaji, written in Marathi, was first published in the late 1950s and has since been a staple in Marathi households, going through numerous reprints over decades.

Born on July 29, 1922, at Saswad near Pune, Purandare was fascinated by Chhatrapati Shivaji Maharaj from an early age and wrote essays and stories which were later published in a book form, ‘Thinagya’ (Sparks).