HeadlinesSports
By Digital Desk On Oct 27, 2021 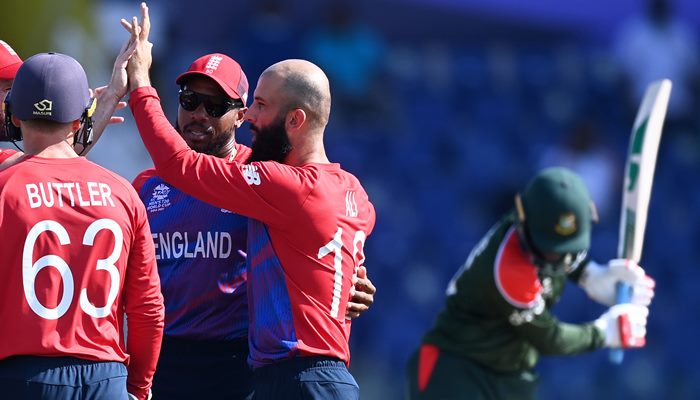 Abu Dhabi – England batter Jason Roy played a crucial knock of 61 runs as his side defeated Bangladesh by eight wickets in their clash here at the Sheikh Zayed Stadium here on Wednesday.

With this win, England went to the top of the table in Group 1 after they consigned Bangladesh to their second loss in the Super 12 stage. England dominated the Asian side in all departments as they chased the modest target of 125 in just 14.1 overs.

Chasing 125, England faced no difficulties as the opening pair of Jos Buttler and Jason Roy played a partnership of 39 runs in 4.5 overs. The first success came to Bangladesh in the form of Buttler’s wicket, leaving England’s total at 39/1.

Later, Dawid Malan anchored the innings as he played a knock of 28 runs and took his team over the line against Bangladesh.

Earlier in the match, England’s bowlers produced their second stellar performance of the tournament to restrict Bangladesh to 124/9. Spinners Moeen Ali and Liam Livingstone shared four wickets between them, while Chris Woakes, who took the new ball, was economical with 1/12 and Tymal Mills scalped three at the death.

For Bangladesh, Mushfiqur Rahim played an innings of 29 runs and brought his team to a decent total of 124/9.

England will now be facing Australia for their next clash of the ICC Men’s T20 World Cup 2021 on October 30 in Dubai while Bangladesh will be going against West Indies on October 29 in Sharjah.

Mitchell determined for championship : We’ll give it everything we’ve got…