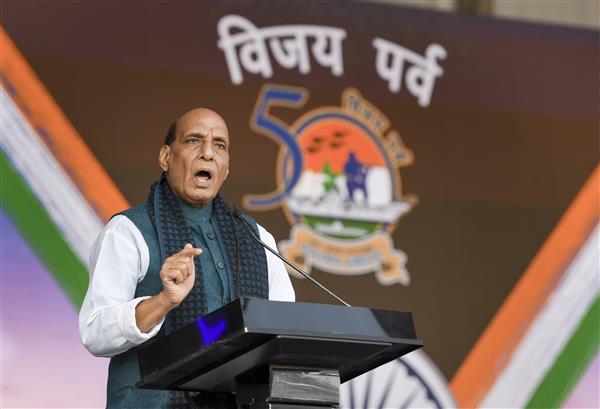 New Delhi : On the occasion of Swarnim Vijay Diwas, Defence Minister Rajnath Singh on Thursday remembered the courage and sacrifice of the armed forces during the 1971 war and called it a “golden chapter in India’s military history”.

Taking to Twitter, the Defence Minister said, “On the occasion of ‘Swarnim Vijay Diwas’ we remember the courage and sacrifice of our armed forces during the 1971 war. The 1971 war is the golden chapter in India’s military history. We are proud of our armed forces and their achievements.”
He also shared a picture of “Instrument of Surrender” and said, “This day, that year!”

Swarnim Vijay Varsh commemorates 50 years of India’s victory in the 1971 war and the formation of Bangladesh.

He also lit four flames that were to traverse along with different directions. Since then, these four flames have traversed across the length and breadth of the country, including to Siachen, Kanyakumari, Andaman and Nicobar Islands, Longewala, Rann of Kutch, Agartala.

The flames were taken to key battle areas and also to the houses of gallantry award winners and veterans of the 1971 war.