HeadlinesNationalPolitics
By Digital Desk On Oct 5, 2021 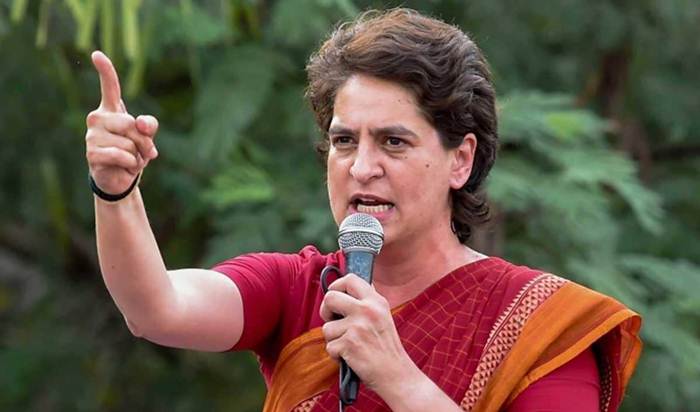 Sharing a video on Twitter, the Congress General Secretary slammed the Centre for her detention and questioned the government for not arresting those who “crushed the farmers”.
“@narendramodi Sir, your government has kept me in custody for the last 28 hours without any order and FIR. This person who crushed the annadata (farmers) has not been arrested yet. Why?” alleged Priyanka Gandhi in a tweet today.

In the video that she shared on her official Twitter handle, she is heard saying, “I have heard that you are visiting Lucknow today to celebrate Azadi Ka Amrit Mahotsav. Have you seen the video where your minister’s son is mowing down the protesting farmers? Answer the nation, why the minister has not been sacked and why the accused has not been arrested,” the Congress leader said.

“Why the opposition leaders like me are in the custody without any order or FIR. I want to know why the accused is free.”

She further pointed out that the farmers have been raising their voices for last many months now but they are being ignored.

“Visit Lakhimpur Kheri once. You must listen to the farmers. It is your duty to safeguard the farmers,” she added.

As many as eight people died in the Lakhimpur Kheri incident on Sunday, said Uttar Pradesh police.

The Samyukta Kisan Morcha (SKM) had on Sunday issued a statement regarding the incident claiming the death of four farmers and alleged that one of the four farmers was shot dead by Union Minister of State for Home Ajay Mishra Teni’s son, while the others have been allegedly run over by the vehicles of his convoy.

Meanwhile, refuting SKM’s allegations, MoS Teni said that his son was not present at the spot, adding that some miscreants merged with protesting farmers and pelted the stones on the car which lead to the ‘unfortunate incident’.