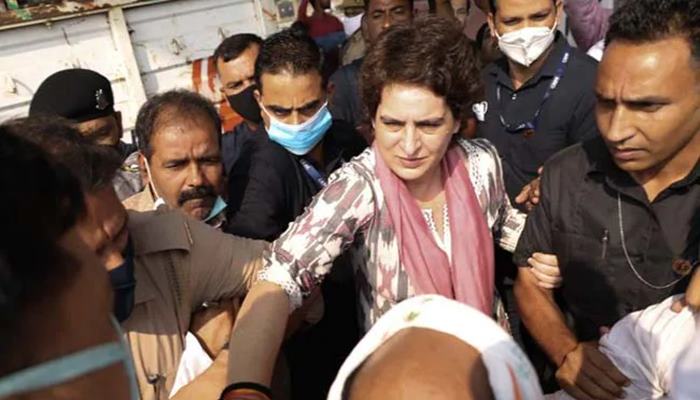 Lucknow (Uttar Pradesh) – The police, who detained Priyanka Gandhi Vadra while she was on her way to Agra to meet the family members of a sanitation worker who had allegedly died in police custody, later allowed four persons to proceed to the place in Agra.

“Four people have been allowed to visit Agra now…we are going there to meet the family of a sanitation worker who died in police custody,” Vadra told reporters.

Earlier today, Vadra has been detained by police in Uttar Pradesh when she was going to Agra to meet the family of a sanitation worker who died in police custody.

While stopping her, police told her, “You do not have permission and we cannot allow you. Section 144 is imposed.”

A police official had said, “Congress leader Priyanka Gandhi Vadra is being taken to Police Lines. She will not be allowed to proceed to Agra.”

Her car had been stopped at the first toll plaza on the Lucknow-Agra Expressway.

Vadra was going to meet the family of a sanitation worker who was arrested in connection with a theft and died in police custody.

“They say I can not go to Agra. They stop me wherever I go. Should I keep sitting in restaurants? Just because it is politically convenient for them? I want to meet them, what is the big deal?” she added.

A sanitation worker, who was arrested by police yesterday in connection with a theft of Rs 25 lakh from a warehouse on 17 October, died in police custody.

ADG Agra, Rajiv Krishna said, “Our officers are in contact with his family. They’re cooperating. Action will be taken if there was any negligence. The family has filed a complaint. They suspect that he was beaten up by the police following which he died. FIR was registered and matter will be probed.”

“During questioning, he confessed to the crime. Police recovered Rs 15 lakhs from his home. During recovery he fell ill. Police and his family rushed him to the hospital. The doctor declared him brought dead. FIR registered, further action will be taken as per PM report,” SSP Agra, Muniraj said. (ANI)