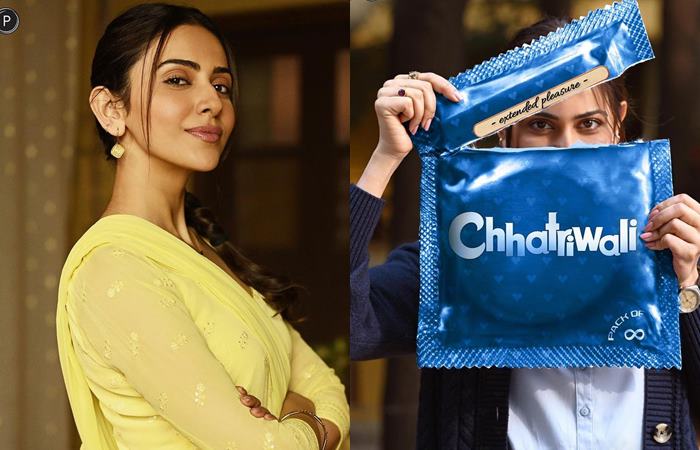 Rakul took to her Instagram account to unveil her first look from the movie, which is being directed by Tejas Prabha Vijay Deoskar and produced by Ronnie Screwvala’s RSVP.

The upcoming social family entertainer, in which the actor will be seen essaying the role of a condom tester, recently went on floors in Lucknow.

The film will focus on a female unemployed chemistry graduate, who is desperate for a job in a small town and ends up taking up a job as a condom tester, a secret she must hide from everyone around her.

‘Chhatriwali’ is a quirky drama and another fresh high-concept film by the production house that is known to bring path-breaking subjects to audiences.

Sharing her excitement about the upcoming movie, Rakul said, “It’s quite an interesting and hatke subject and I am very thrilled about starting the journey of my character. It’s important to highlight some issues in a light-hearted way and that has got me pretty excited.”

Filmmaker Tejas Deoskar also spoke about the movie and said, “Our film is a social family entertainer, which aims at de-stigmatising the use of condoms and we are truly excited that the film has gone on floors.”

“Rakul brings freshness to every role that she portrays and with a sensitive, thought-provoking subject like this, the audience will certainly enjoy a roller-coaster ride of comedy,” Tejas Deoskar added.

Meanwhile, apart from ‘Chhatriwali’, Rakul will also be seen in ‘Mayday’, ‘Doctor G’ and ‘Thank God’.