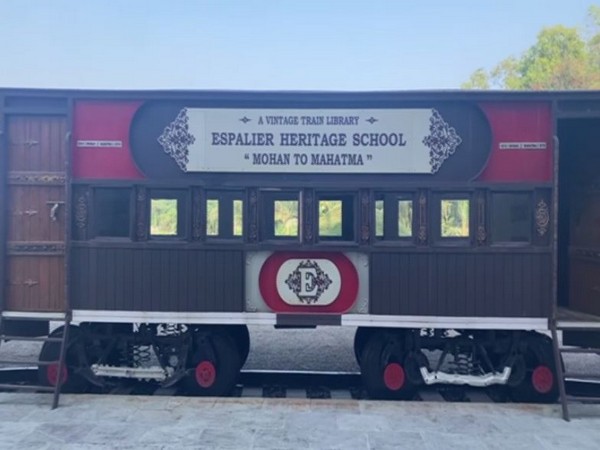 Nashik : Breaking stereotypes, a school in Maharashtra’s Nashik is offering classrooms under the tree, no strict uniform rule and a library in a train to induce special learning in children during their formative years.

Sachin Joshi, Principal of Espalier Heritage School in Nashik told media that the vision behind the school is to break the stereotype. “This school is constructed in such a way that children will themselves want to come to school,” said Joshi. Talking about the unique train library, Joshi said it was inspired by Tetsuko Kuroyanagi’s memoir ‘Totto-chan, the Little Girl at the Window’.

“Totto-chan is a very beautifully written book, where the schools were in train in Japan. We obviously could not execute the idea but based on that we have made a very unique train library,” the Principal said.

Highlighting the versatility of the curriculum, Joshi elaborated on the rules and types of learning modes the school offers. “Our curriculum includes outdoor classrooms beneath the trees, no uniform for students among other things. We have farms where children indulge in farming. We also have a science park which is constructed in a way to induce practical learning. Moreover, we put special emphasis on drama and education. We have amphitheatres, in-house record studio and have converted over 70 per cent of the syllabus to music,” said Joshi.

The principal further talked about the importance of special education and expression learning among young children and elaborated on the effects surroundings and upbringing can have on their mindsets.

“It is the initial 10-12 years when a child’s brain fully develops and hence it is crucial to stimulate it and induce positive images to have a constructive mindset. Setting up of group learnings, night schools etc are among other activities that the school uses as a part of its comprehensive curriculum,” he said.

Joshi further said that the curriculum is constructed in such a way that after almost every fifteen minutes children can have entertainment breaks and enjoy extracurricular activities.

“Our school does not have bound rules for children, unlike other schools. In addition to that, children sit on the floor instead of desks and benches. We believe uniforms in a way restrict and limits children’s abilities, therefore there are no uniforms in the school. We also don’t believe in punishing children, instead, we tell them to cycle for 30 minutes, which in turn generates electricity,” he said.

“We have a mud party where children can play amongst each other and with teachers. Nobody addresses teachers with Sir or Ma’am but instead call them ‘Bhaiya/Didi’,” added the Principal.