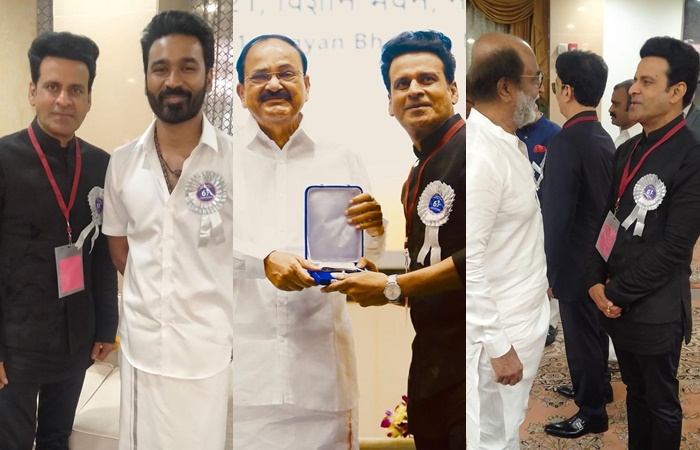 New Delhi : Actor Manoj Bajpayee, on Tuesday, treated his social media fans with a few pictures from the 67th National Film Awards ceremony in which he could be seen posing with superstars Rajinikanth and Dhanush.

A day after receiving the Best Actor accolade for his film ‘Bhonsle’, Manoj took to his Instagram handle and shared three pictures from the National Film Awards ceremony.

The first candid picture featured himself having a conversation with superstar Rajinikanth, the second sees him posing with actor Dhanush and the third captures him receiving the prestigious award from vice president Venkaiah Naidu.

Addressing the three as the ‘greats’, Manoj wrote, “Some moments with the greats during the national film awards ceremony !!”

Manoj and Dhanush were conferred with the Best Actor Award for their films ‘Bhonsle’ and ‘Asuran’ respectively at the 67th National Film Awards, which took place on Monday.

Manoj, who has previously won the National Film Award twice, Best Supporting Actor in ‘Satya’, and Special Jury Award for his feature film ‘Pinjar’, was felicitated at the in-person ceremony for his performance in the Devashish Makhija directorial ‘Bhonsle’.

The movie saw the ‘Family Man’ star portraying the titular character who is a retired policeman and is living a non-interfering life in a colony dominated by locals, diagnosed with stage 4 brain tumour.

South actor Dhanush received the Best Actor Award for his role in ‘Asuran’, which also won the Best Tamil Film award. It’s a period action drama film written and directed by Vetrimaaran, based on Poomani’s novel ‘Vekkai’. The film’s plot was influenced by the real-life Kilvenmani massacre that occurred in 1968.

At the ceremony, Dhanush was joined by Aishwarya R Dhanush, his wife, and superstar Rajinikanth’s daughter.

Rajinikanth was also conferred with the Dadasaheb Phalke Award for his remarkable contribution to cinema.

One of the country’s most eminent awards in entertainment, the 67th version of the National Film Awards, which were handed out to the awardees by Vice President Venkaiah Naidu, was initially going to be held in May last year but had to be delayed due to the COVID pandemic.