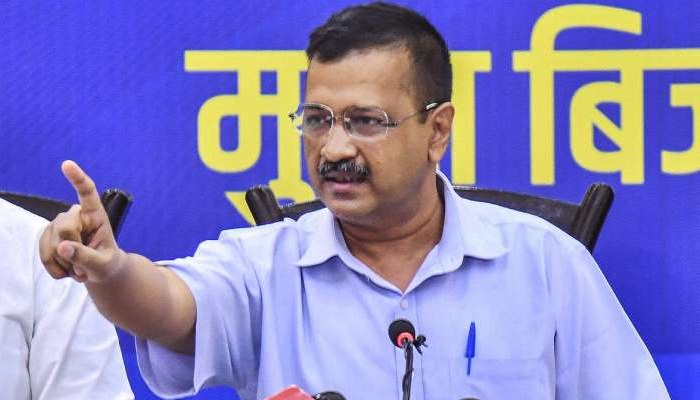 Panaji – Taking a dig at Goa BJP for allegedly “copying” the Aam Aadmi Party’s (AAP) governance model by promising free water and doorstep services scheme of his government, Delhi Chief Arvind Kejriwal on Tuesday asked the Goans vote for the “original”, not the “duplicate”.

Speaking at a media event here during his visit to poll-bound Goa, the National Convener of AAP, Kejriwal announced “seven guarantees” for Goans. Kejriwal said that if voted to power, the AAP government will provide jobs for Goans, “not just for MLA’s relatives.”

One job per family

He promised one job per family for the unemployed and said the government will provide Rs 3000 per month until one person of the family is employed.

“Will reserved 80 per cent of private jobs in the state for Goans. Will give Rs 5000 per month for unemployed in the tourism sector due to COVID, and Rs 5000 per month to people affected by mining ban,” he said.

The Delhi Chief Minister also promised to open a “skill university’ in the state.

“Why vote for “duplicate”?

“Why vote for “duplicate” when you can vote for the “original?” asked Kejriwal referring to Goa Chief Minister Pramod Sawant allegedly copying the free water and Doorstep services scheme of the Delhi government.

We delivered all promises by ending corruption

Kejriwal also said that people often asked him “from where will the money come? People used to ask the same in Delhi, but we delivered all promises by ending corruption.”

“I pray for peace, prosperity and progress of the people of Goa,” he tweeted Kejriwal after the visit.

Delhi Chief Minister’s visit to Goa carries significance as AAP is gearing up for getting a foothold in the state.