Katrina Kaif’s lime-yellow jumper is what you need to update your wardrobe with! 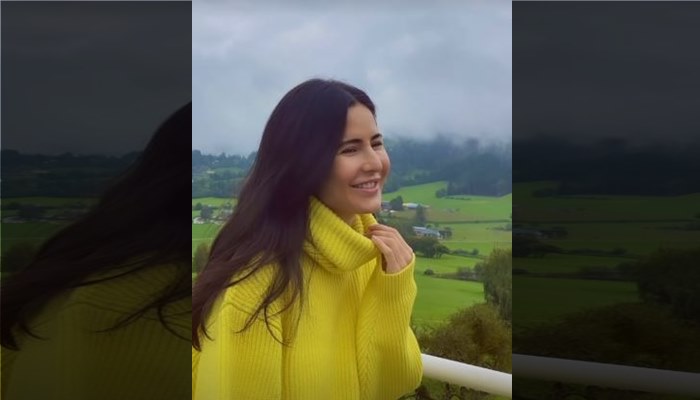 New Delhi – It’s almost ‘sweater weather’ and Bollywood diva Katrina Kaif who is known for acing her sartorial looks, has just shown us what we might have been missing out on to add to our wardrobe!

Katrina, who is currently shooting in Austria with superstar Salman Khan for the next schedule of their upcoming movie ‘Tiger 3’, took to Instagram and shared two snaps of herself enjoying the European ‘sweater weather’.

While the pictures are proof that the ‘Bharat’ actor is spending a happy Tuesday in Europe, not to miss is the autumn fashion that she has totally nailed.

In the pictures, the actor could be seen snuggled up in a lime yellow coloured jumper. The diva looked magnificent even without makeup on her face.

The lime colour is the new black currently in the books of fashion. The colour of happiness and optimism is trending and looks super modish and classy at the same time. With or without accessories, this colour will help you look stylish all the time.

Meanwhile, speaking of Katrina’s work front, the actor has recently flown to Austria with the ‘Tiger 3’ team to shoot for the international leg of their upcoming movie.

Salman and Katrina will perform some spectacular action sequences in places like Upper Austria, Salzkammergut, Dachstein Salzkammergut and finally in Vienna.

The team was earlier shooting in Turkey, where Salman and Katrina also met the Turkish tourism minister Mehmet Nuri Ersoy. They were spotted at lunch together after finishing shoot day for the film.

‘Tiger 3’ is the third film in the successful ‘Ek Tha Tiger’ franchise, which will also feature actor Emraan Hashmi as an antagonist.

The upcoming film will mark Emraan’s maiden collaboration with YRF, which is producing the flick.

‘Tiger 3’ will have Salman reprise his role of R&AW (Research & Analysis Wing) agent Avinash Singh Rathore aka Tiger, while Katrina will be seen playing the female lead.

The first film of the popular franchise called ‘Ek Tha Tiger’ came out in 2012 and was directed by Kabir Khan. The film received an overwhelming response and was a massive success at the box office.

The second movie, ‘Tiger Zinda Hai’, had released in 2017 and was directed by Ali Abbas Zafar. Salman and Katrina have featured in both movies.

Apart from ‘Tiger 3’, Katrina is awaiting the release of Rohit Shetty’s upcoming film ‘Sooryavanshi’ starring Akshay Kumar in the lead role. She will also be seen playing the lead in the horror-comedy ‘Phone Bhoot’ with Ishaan Khatter and Siddhant Chaturvedi.

She recently announced her next big project ‘Jee Le Zara’ with Priyanka Chopra and Alia Bhatt.

Kamya Punjabi excited to start her political journey with Congress