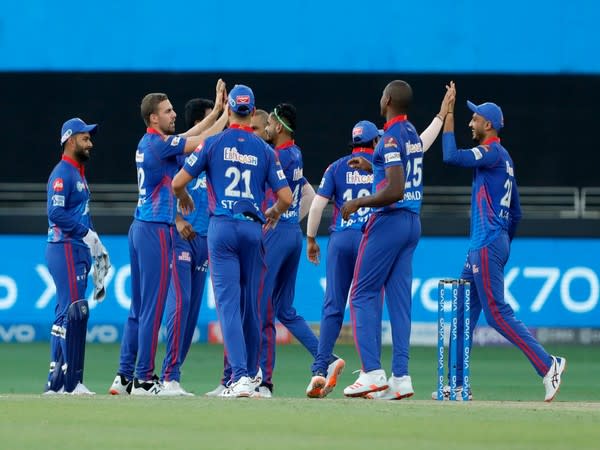 Dubai : Anrich Nortje and Kagiso Rabada starred with the ball as Delhi Capitals (DC) restricted SunRisers Hyderabad (SRH) to 134/9 in their allotted twenty overs in an Indian Premier League (IPL) encounter here at the Dubai International Stadium on Wednesday.

Anrich Nortje (2-12), Kagiso Rabada (3-37), and Axar Patel (2-21) bamboozled the opposition with their pace, accuracy and length. For, SRH Abdul Samad and Rashid Khan played innings of 28 and 22 respectively.

Opting to bat first, SRH had a shaky start when their star overseas opener David Warner walked back to the pavilion in the very first over of the innings. The South African speedster ousted Warner on pace and the Australian got out for a three-ball duck.

SRH captain Kane Williamson, and Wriddhiman Saha managed to gain momentum in the match but opposition bowlers gave them no respite. With continuous pressure on one end, Saha took his chances against Kagiso Rabada and welcomed the South African bowler with a six in the fifth over. But SA bowler had the last laugh as Saha went back to the dressing room after got beaten for pace with the short ball.

After the first powerplay, SRH were 32/2. In the 9th over of the innings, Marcus Stoinis walked off the field after getting injured. In the very next over SRH captain Williamson got caught by Hetmyer off Axar Patel bowling after getting lucky two times in the match.

Manish Pandey soon followed his captain to the pavilion in the next over after Rabada got him caught and bowled. With runs in scarcity for the team in orange, the wickets continued falling as Nortje trapped Kedar Jadhav for LBW in the 13th over.