IPL 2021: Fortunate to play a big role in something special, says Kartik Tyagi 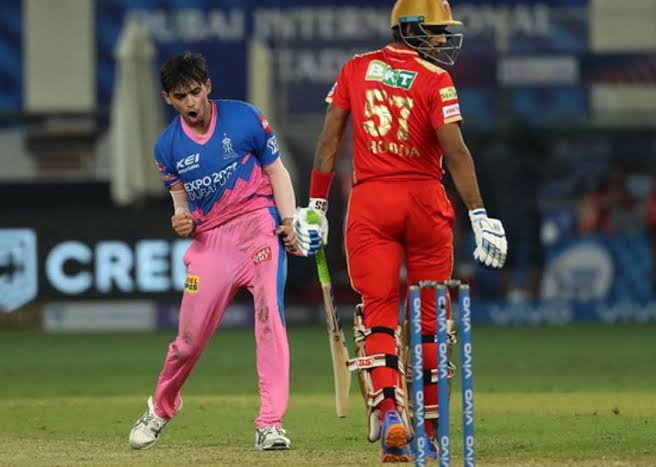 Dubai [UAE] : Rajasthan Royals (RR) pacer Kartik Tyagi was elated after being part of ‘something special’ as he handed a sensational last over victory to his team against Punjab Kings (PBKS) in their Indian Premier League (IPL) encounter here at the Dubai International Stadium on Tuesday.

Mayank Agarwal and KL Rahul innings of 67 and 49 respectively for the Punjab Kings went in vain as their middle order failed them miserably after such a good start. For the Royals, Kartik Tyagi was the man of the hour as the pacer conceded just one run in the last over and picked two wickets to give his team a victory for the ages.
Kartik Tyagi who was the player of the match, in his post-match presentation said: “I was injured during the India leg of the IPL and by the time I got fit, the tournament was suspended. Felt sad. So this feels really good.”

“I have been talking to people over the years and they keep telling me that things keep changing in this format, so I need to keep believing. I’ve always heard from everyone and also watched games in this format where strange things have happened. Today, I was fortunate to play a big role in something special. I was bowling a bit too short earlier, later worked on it consciously after getting a lot of feedback,” he added.

Sanju Samson the captain of Rajasthan Royals said: “It’s funny that we kept believing (that we could win). I kept the overs of Mustafizur and Tyagi for the end, believing. Cricket is a funny game right. We just kept fighting and believing.”

“I always believe in my bowlers, want to keep fighting and that’s why I kept those two overs till the end. To be very honest, to get that score on this wicket, we felt good because we had the bowling. If we took the catches, we could have won the game earlier. People have really worked hard on their fitness,” the skipper added.