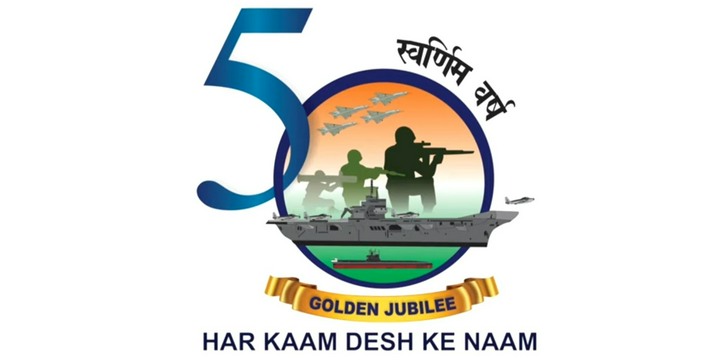 New Delhi : Defence Minister Rajnath Singh on Sunday said that India has contributed to the establishment of democracy in Bangladesh and in the last 50 years, Bangladesh has progressed rapidly on the path of development, which is an inspiration for the rest of the world.

Addressing the Swarnim Vijay Parv celebrations today at India Gate to commemorate 50 years of India’s historic victory in the 1971 war and Indo-Bangladesh friendship, Rajnath Singh said, “India has contributed to the establishment of democracy in Bangladesh and today we are very happy that in the last 50 years Bangladesh has progressed rapidly on the path of development, which is an inspiration for the rest of the world.”

“Today we all have gathered here at India Gate to celebrate the ‘Vijay Parv’ organized under the ‘Swarnim Victory Year’ of the 1971 Indo-Pakistani War. This festival commemorates the glorious victory of the Indian armies, which changed both the history and geography of South Asia,” he added.

“It was decided to organize this event in a grand form, but after the untimely demise of the country’s first CDS, General Bipin Rawat, it has been decided to mark it with simplicity. On this occasion, I pay my tributes by remembering him too,” he said.

“On this day, I bow to the bravery, valour and sacrifice of every soldier of the Indian Army, due to which India won the 1971 war. This country will always be indebted to the sacrifice of all those bravehearts,” he added.

“Sometimes I wonder, what was the fault of our Bengali sisters and brothers? For demanding their rights? Seeking to preserve their art, culture and language? For talking about his proper representation in politics and governance?” he said.

“The injustice and atrocities on our Bengali sisters and brothers were a threat to the entire humanity in one form or the other. In such a situation, it was our Rajdharm, Rashtradharm and military religion that helped in liberating the people of then ‘East Pakistan’ from that injustice and exploitation,” he added.

“This war is a classic example of our morals, our democratic traditions and just treatment. It will be rarely seen in history that after defeating another country in a war, a country like ours did not express its dominance over it, but handed over the power to its political representative,” the Defence Minister said.

‘Swarnim Vijay Parv’ is being celebrated at India Gate, New Delhi from December 12 till December 13, 2021, to commemorate 50 years of India’s historic victory in the 1971 war and the Indo-Bangladesh friendship. The event was inaugurated by Rajnath Singh today. Major weapons and equipment used during the 1971 war have been displayed along with the snippets of major battles.