Dravid won’t leave much to chance, he’ll be about preparation and process: Ashwin

HeadlinesNationalSports
By Digital Desk On Nov 18, 2021 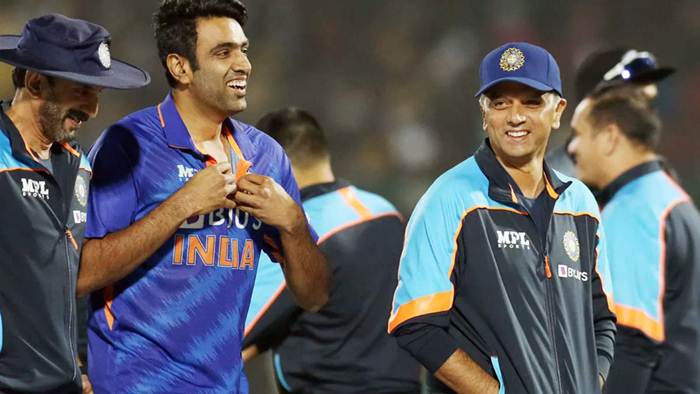 Jaipur (Rajasthan) : India off-spinner Ravichandran Ashwin has said that it is too early for him to comment on Rahul Dravid’s coaching style, but he is sure that the head coach will be big on preparation and process.

Rahul Dravid’s coaching stint got off to a winning start as Rohit Sharma-led India defeated New Zealand by five wickets in the first T20I.
“It’s too early for me to comment on Rahul Dravid’s coaching style, we need to give him breathing space. He’s put the hard yards in through the U-19 level etc. He won’t leave much to chance, and he’ll be all about preparation and process, so that we can bring the happiness back into the Indian dressing room,” Ashwin told host broadcaster Star Sports after the first T20I ended.

Suryakumar Yadav (62) and Rohit (48) starred with the bat as India chased down 165 to defeat New Zealand by five wickets in the first T20I of the three-match series here at the Sawai Mansingh Stadium.

Earlier, Martin Guptill and Mark Chapman played knocks of 70 and 63 respectively as New Zealand posted a total of 164/6. For India, Ravichandran Ashwin and Bhuvneshwar Kumar returned with two wickets each.

“The slower you bowled, there was more purchase you got on this pitch. If you hit the seam and tossed it up, it did do things like Santner showed in the second innings. It’s tricky in T20s, you can’t miss your lengths and you don’t know when to toss it up but here it did help to give it some air. It was a slightly under-par score and we thought 170-180 would be par. We thought we would cruise home around the 15th over, but that’s T20 cricket for you,” said Ashwin.

“I bowled the first over in the powerplay, and figuring out the pace to bowl is important and it took me some time to figure that out. It’s about varying to pace and knowing when to vary it. It’s important to take each of the 24 balls as an event, and look at each ball in isolation and as an opporunity. You might have to play catch-up, but the batsman is trying to play catch-up and trying to play you too, so you can’t get intimidated,” he added.

With this win, India gained a 1-0 lead in the three-match series, with the second game set to be played on Friday.