Deadly tornadoes devastate communities across 6 states in US 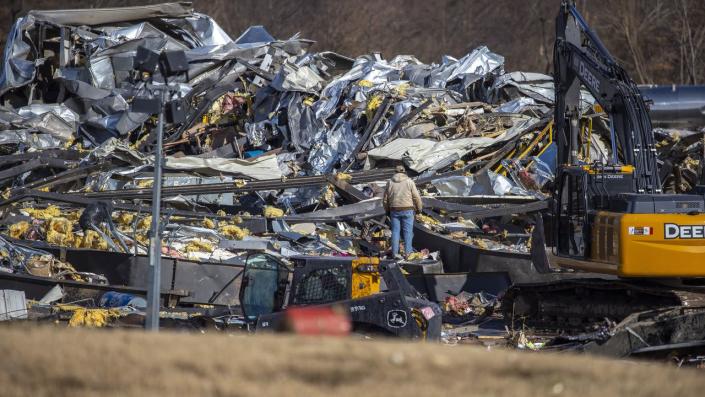 Washington : More than 80 people are feared dead following reports of tornadoes late Friday and early Saturday in six states of the US, while Kentucky district judge Brian Crick was among those who lost his life.

There were at least 50 tornado reports during the outbreak this weekend in Arkansas, Illinois, Kentucky, Mississippi, Missouri and Tennessee, reported CNN.

District Judge Brian Crick was among those who lost their lives when a series of tornadoes pummeled the state this weekend, according to a statement from Kentucky Supreme Court Chief Justice John D Minton Jr.

Kentucky governor Andy Beshear says he fears that more than 80 lives have been lost in the storms that pummeled his state and that he expects the death toll to rise over 100, reported CNN.

Beshear told NBC’s “Meet the Press” on Sunday that he also expects other challenges ahead given power outages and winter weather conditions and said that certain morgues throughout the state may not be big enough to accommodate the current needs.

“One of our challenges is we’re losing so many people in this, most of our morgues aren’t big enough, so our coroners from all over the state are coming in,” Beshear said.

More than 50,000 residents across the state of Kentucky remain without power following Friday night’s storm. As of 12:30 pm ET on Sunday, 53,553 people are without power according to Power Outage.

In an interview on Sunday on NBC’s “Meet the Press,” Kentucky Gov. Andy Beshear said most of the outages were in the Western part of the state.

The family of Clayton Cope, a 29-year-old US Navy veteran, confirmed to CNN that he died when a tornado hit an Amazon warehouse in Edwardsville, Illinois, on Friday evening.

A tornado warning siren sounded 11 minutes prior to a powerful storm ripping through an Amazon warehouse in Edwardsville, Illinois, on Friday, according to a company representative.

“Managers were on the loudspeakers telling people to get to the shelter-in-place area. They were also being guided by other managers and other employees who were trying to get everybody to that safe location,” Amazon spokesperson Kelly Nantel told CNN affiliate KSDK Sunday morning.

Six people were killed at the facility as a result of the tornado, CNN previously reported. The company is donating one million dollars to a local foundation for recovery efforts in the local community, Nantel said.

Powerful storms like the ones that tore through parts of the central United States this weekend are the “new normal” in an era of climate change, the top federal emergency management official said on Sunday.