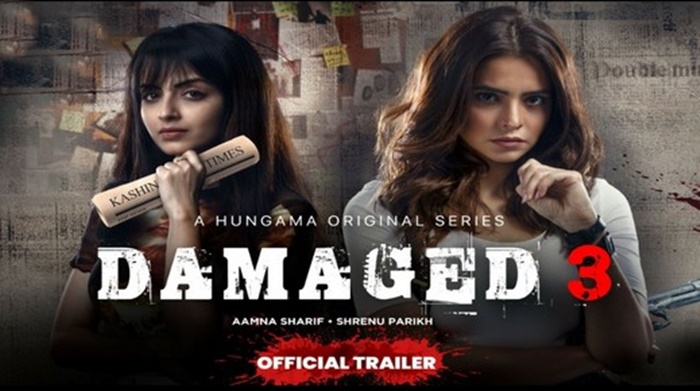 Mumbai : Actor Aamna Sharif is all set to make her digital debut with the third season of the psychological crime drama ‘Damaged’.

Shrenu Parikh will also be seen showcasing her acting skills in ‘Damaged 3’.
In the Hungama Play’s popular series, Aamna will play a headstrong cop while Shrenu will essay the role of a budding journalist. The series is produced by Endemol Shine India and directed by Ekant Babani.

Speaking about the show, Aamna said, “The Damaged franchise is known for its portrayal of strong female characters and being part of the show was an exciting opportunity for me.

My character Rashmi is young, strong and independent DSP in Mumbai with a shade of grey, who gets respect from her colleagues and other people in the

town. My character is very exciting as today, audiences are looking for shows where the woman character is portrayed with more originality and authenticity.”

Aamna was earlier seen in TV shows such as ‘Kasautii Zindagii Kay 2’ and ‘Kahiin to Hoga’. On the other hand, Shrenu is known for her performances as the lead in ‘Iss Pyar Ko Kya Naam Doon?’ and ‘ Ek Baar Phir, Dil Bole Oberoi’ among others.