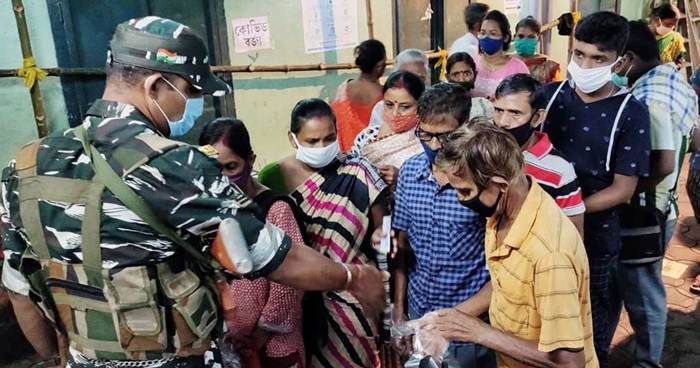 Bhabanipur (West Bengal) : Amid the ongoing by-poll in the West Bengal’s Bhabanipur Assembly constituency, the security has been increased in the city to prevent any untoward incident. Women personnel of the Central Armed Police Force (CAPF) have also been deployed in the constituency.

Meanwhile, at least 7.57 per cent voter turnout was registered till 9 am during the by-election held in the Bhabanipur Assembly Constituency.

By-polls are being conducted on Thursday in three assembly constituencies in West Bengal – Bhabanipur, Samserganj, and Jangipur.

Bhabanipur by-poll has become a prestige battle for West Bengal Chief Minister Mamata Banerjee, who is presently not an MLA.

Notably, Mamata Banerjee was defeated by BJP leader Suvendu Adhikari in the Nandigram constituency in the Assembly elections held earlier this year.

Following this, the Bhabanipur Assembly seat was vacated by the West Bengal Agriculture Minister Sobhandeb Chattopadhyay in May, making way for West Bengal Chief Minister Mamata Banerjee to contest from Bhabanipur seat as a move to continue to hold her post.

The Mamata Banerjee-led TMC registered a landslide victory in polls winning 213 seats in the 294-member West Bengal assembly. The BJP lost the polls but emerged as the second-largest party with 77 seats.