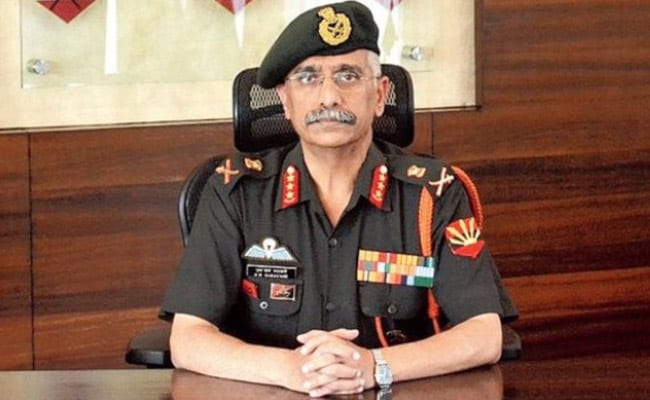 New Delhi : Stressing on the disruptive technologies that are responsible for transforming the character of the modern world, Chief of the Army Staff, General Manoj Mukund Naravane, on Monday said that enhancing capabilities of the armed forces is imperative given the country’s active and disputed borders with two neighbor.

“Disruptive technologies are transforming the character of the modern world, faster than ever before… Given our active borders and disputed borders in the North and East with our two neighbor, capability development remains a national imperative,” Army Chief said while addressing a webinar.

The Indian Army has inked a Memorandum of Understanding with the Bhaskaracharya National Institute for Space Applications and Geo-Informatics (BISAG-N), Gandhinagar, Gujarat, informed a defence ministry release.

This MoU will facilitate the exchange of knowledge and collaboration in the fields of emerging technologies for the development of GIS and IT-based Enterprise Resource Planning Software, Training Content, Telecasting of Audio-Visual Content, Research and Knowledge Partnership, Technical Support and Up-gradation for Resources Developed under a holistic partnership for projects which have the prior approval of Army Management Studies Board (AMSB) or approved on a case-to-case basis.

The Defence Ministry in its official release said that the MoU will leverage the relative advantage of BISAG-N to support training and evolving innovative solutions to boost operational capabilities of the Indian armed forces.

BISAG-N which is an autonomous scientific society under the Ministry of Electronics and Information Technology, Government of India will act as a medium of exchange of knowledge and collaboration in the fields of emerging technologies.

General MM Naravane, COAS addressed the gathering through a virtual platform in which he emphasized that the signing of this MoU is a path-breaking initiative towards enhancing the interaction of the Indian Army with academia.

The Army Chief stated that ‘Atmanirbharta’ (or self-reliance) is the key to staying ahead of the technological curve over our adversaries for which the Learning Management System projects for Map Reading, IT training and Geo-spatial Information system with BISAG-N are a great beginning in which the joint collaboration is already showing a promising beginning.

The event was presided over by Lieutenant General Raj Shukla, GOC-in-C Army Training Command. He stressed that this is a step towards strengthening the linkages between academia and the Indian military. He laid specific emphasis on ‘Civil-Military Relations’, and expounded multifaceted aspects pertaining to mutual cooperation.

“These MoUs will act as catalyst and enabler for orienting academia towards strengthening the nation’s defence and capability enhancement,” he said.

TP Singh, DG, BISAG-N, highlighted that with the signing of this MoU, BISAG-N will act as a medium of exchange of knowledge and collaboration in the fields of emerging technology for the development of GIS and IT-based software, generation of customised training content, telecasting audio-visual training content, develop specific projects required by Indian Army in the fields of IT and artificial intelligence. BISAG-N dedicated the Learning Management System (LMS) developed for ARTRAC and its affiliated institutes, during the event.