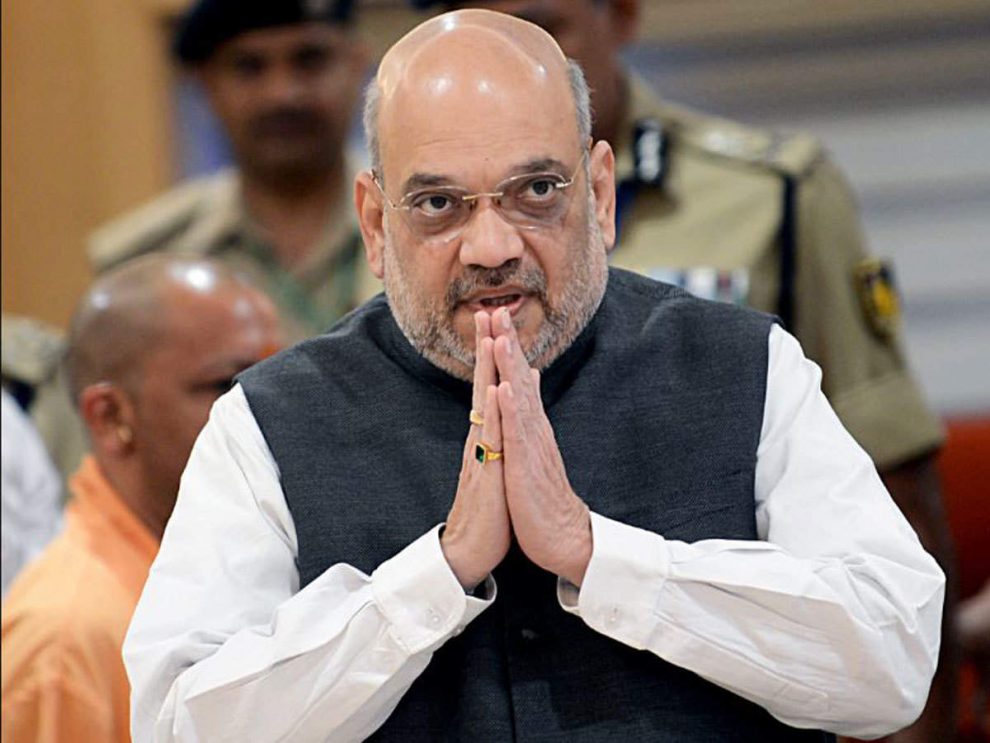 New Delhi – Lauding the 20 years of governance of Prime Minister Narendra Modi–since the start of his journey as the Chief Minister of Gujarat, Union Home Minister Amit Shah on Wednesday said the people of the country handed over power to him by giving an absolute majority to Bharatiya Janata Party (BJP) in 2014 when “there was policy paralysis” and India’s democratic system was in a state that it “would collapse any time”.

Taking a dig at the opposition, the Home Minister said the central government was in disarray over power-tussles before the 2014 general elections when the BJP got the absolute majority. “Every Cabinet Member then took themselves as Prime Minister and the country’s security was at stake, and country’s honour was almost on its lowest position in foreign countries,” he said.

“There was policy paralysis. There was a corruption of Rs 12 lakh crores. There was a new corruption every day. There were several questions on internal security. And it seems our democratic system would collapse at any time. At that time BJP decided to field then Gujarat Chief Minister as its Prime Minister candidate,” the Home Minister said while addressing the inaugural session of ‘National Conference on Delivering Democracy: Reviewing two decades of Prime Minister Narendra Modi as head of Government’.

Shah further said that after the 1960s and by 2014, people doubted if the multi-party democratic system can be successful.

“…People wondered if the system failed, as it didn’t yield fruitful results. With great patience, they took a decision and gave power to PM Modi with an absolute majority,” Shah said.

Speaking on “Delivery of democracy”, the Home Minister said the two words have absorbed the hope of the people of India for 75 years of Independence.

“A country with such a huge diversity should not be chosen on the basis of one person. There should be a multiparty democratic system and each party should have an ideology and on the basis of ideology, there should be an election manifesto. The party should go to public with this manifesto. Whoever the party decides after getting the public opinion should be the leader of the party and he should have the right to run the country. We took this decision after a lot of thought,” he added.

“But after the 1960s and by 2014, people doubted if the multi-party democratic system can be successful,” Shah further added.

“There was an apprehension in the mind of the public that whether the multiparty democratic system has failed or not,” he said.

“The people of the country took the decisions and after 30 years, handed over the rule of this country to Narendra Modi with full majority. For the first time, a non-Congress party formed an absolute majority government. And for the first time, people outside the ideology of Congress got the opportunity to rule freely,” he added.

Shah hailed Prime Minister’s Gujarat governance model and said he revamped the primary education system in the state during his tenure as Chief Minister.

Shah also said that PM Modi tried to change things and did a lot of work on development and transparency in Gujarat.

Informing about the efforts of Prime Minister Modi behind his successful governance in the last 20 years, Shah said “I don’t think there will be any Chief Minister of the country who would not have contested even a Panchayat election before getting this post, unlike PM Modi who became Gujarat CM in 2001 when the BJP took a decision to elect him.”

“Modi ji had no experience of running a village, neither any big degree when he was elected as Chief Minister of Gujarat. He only holds a masters degree and had no degree in management or governance. He was given charge of Chief Minister of Gujarat when the state was reeling under a lot of pressure after facing destruction caused by the Bhuj earthquake in 2001,” he said.

“Despite odd circumstances, Modi ji focussed on each and every aspect for the welfare of the country on both human ground as well as defence, from helping the needy as well as doing ‘surgical and airstrike’,” the Home Minister added.